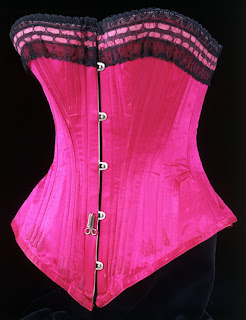 Years ago when my Corset obsession was beginning to really take off I went to the Victoria and Albert museum in London and I saw a beautiful fuchsia pink Corset with a black lace trim and a pink ribbon finishing. On a more recent visit to the V&A museum I unfortunately did not see the corset as the exhibitions change frequently but I re-looked it up in a book I bought from the Museum and I found it again. I decided to recreate this corset but with my own modern flair!

Above is the image of the Corset that is part of the fascinating historical costume collection at the V&A. Its dated from about 1885-1895. It is French and the shape is classic for the end of the 19th century. The steel busk which fasten the corset at the centre front came into popular use around the 1850’s making it much easier for the wearer to get herself into her own corset without as much assistance of others, but help was still needed.

Before the 1880s white cotton or linen were used for “respectable women”. The corsets of this period didn’t have much decoration to them as they were used as a tool to mould the female body to the desired ideal at the time. Bolder colours were used by prostitutes and women of “looser morals” However after the 1880s, thanks to the industrial revolution the corset trade really began to change and develop and more materials were starting to become available and a larger range of fabrics such as coloured silks, satin or silk broche so the colour of the Corset above was typical towards the end of the century with lots of decoration and elegant laces. 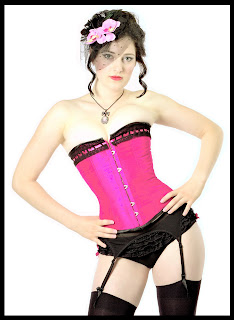 With this elegant historical design as my inspiration and after researching fabrics I found some beautifully bright fuchsia pink silk from a my local little fabric shop in Italy, I had some black lace sent from England and I started working on my own design. However the lining I made from black and white polka dot fabric, just to add a more modern feel to the design! I organised a photo shoot with the photographer Steve Braun and the fabulous model Lydia. It was Lydia’s first time at modelling but she was a complete natural and the photos turned out really nice! Although Lydia does not have a super tiny waist of the women from the Victorian era, I am still happy with the results of a modern day corset for a modern woman. We do not need to lace up super tight like the corsets of the past. The women we see in the old images who have super tiny waists are showing off their social status and their husbands wealth and role in society. The smaller the woman’s waist showed that she simply could not do much and this helped the image men saw women as the “weaker sex”. It was not up until the end of the first world war in 1918 that women were really showing they had a voice, they had proven they could take over the men’s jobs in the factories to help with the war effort and to be seen as equals.

I am glad that today we have a right to choose what we wear and if we want to wear a corset or not. I think, even now, it is still seen as a sexual symbol and I think it will always stay that way but it is our choice to show ourselves in whatever way we please, tight laced or not and not just to satisfy the taste of a possible future husband!

One Response to “Recreating the past”